The Cross Creek Gas/Condensate field is located on the Humble Salt Dome about 15 miles from downtown Houston, Texas, and  5 miles from George Bush International airport.

Hydrocarbons were discovered trapped in the Humble Dome following observation of oil bubbles in the San Jacinto River during 1887. During the early 1900’s Humble city became an oil boom-town due to production from the Dome following the first commercial well drilled in 1905.

The  Cross Creek leases have a gross area of 1,517 acres (about 614 hectares). The Cross Creek leases are held by production and will remain current while hydrocarbons are produced from the field. All of the Cross Creek project wells are now producing at lower than achievable stable gas rates of up to 750 MCFGD and 10 BOPD of 450 API condensate.  The plan is to undertake remedial well operations as described in the table to significantly increase daily production and hence increase revenue.

There are no environmental conditions imposed on the field.  Nor are there any restrictions imposed by the Texas Railroad Commission (The state government department which oversees hydrocarbon production and exploration).

Geologically, the Dome (which in a hundred years following initial production produced over 150 million barrels of oil), formed as a result of a predominantly deep seated salt diapir rising to within 500 feet of the surface.

Most of the historic production has come from Miocene sands in the cap rock. The Humble Salt Dome is about three miles in diameter having a steep salt face on its north and western flanks. 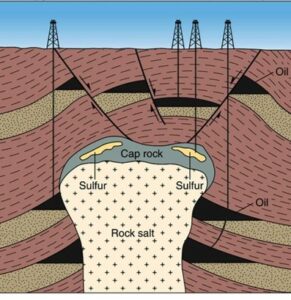 There are a number of Wilcox Sands that that have not been not been completed including the sub-salt well that found a gas reservoir at a depth of 16,400 feet and beneath a 4,000 foot salt overhang. Most of the production today, however, has come from Miocene sands at a depth of about 10,000 feet. Since being drilled on the mid 1990’s these wells have produced over 18 billion cubic feet of gas.

Most of the past production at the Humble Dome has come from shallow cap rock sands. This field contains multiple reservoirs which means once one is depleted, new perforations can be shot into other zones to enable production from each well bore to continue. The average unit well production in the region is one million barrels (BOE).

Texas is a major hydrocarbon province and the state has the largest production of oil and gas in the USA. The State alone is ranked 8th in worldwide production. Significant production within the region of Cross Creek means there is existing infrastructure and extensive technical expertise providing lower costs than most places in the world resulting in lower opex and capex. Cross Creek is situated close to the largest refineries in North America which provides low transport costs for liquids and extensive pipeline network for gas transport.

During the mid 1990’s, Chevron leased over 2,000 acres over the western flank of the Humble Salt Dome. While holding the leases Chevron drilled ten directional wells, of which 9 are within the Cross Creek Leases, seeking flank gas production at a depth of about 10,000 feet.

Chevron sold the field in 1998. Since that time the leases have been owned by large companies with a drilling focus elsewhere. No rig workovers or recompletions to the next zones have been performed over the last twenty years. Cross Creek contains six producing wells. All of these wells have leaking tubing, plugged perforations and salt plugs that require remedial rig or coiled tubing work. In addition, the production history for these fracked wells shows precipitous drops in production that can be remedied through coiled tubing HF acidization work. There are also perforated zones available for fracking as well as unperforated sands in the Lower Wilcox A, Wilcox B and Wilcox C sand reservoir zones. Also the subsalt sand at a depth of 16,400 feet was drilled but never been completed. This zone has the potential for a high pressure, high rate gas and oil completion. 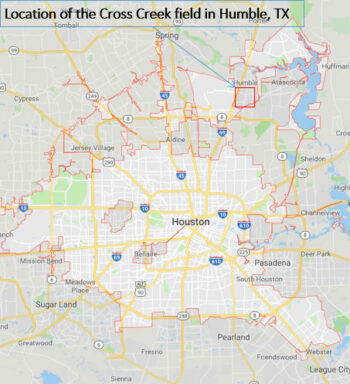 Texadon will revamp 7 productive gas/condensate wells drilled within the lease. The proposed work programme and anticipated results are contained in the table below.

This development programme is expected to cost US$5 million (£3.8 million) for 75% working interest and take 4 months to complete.

Projected net revenue for the first full productive year is expected to be US$6.5 million.  All planned operations designed at increasing production and hence production are via workovers on existing wells. No new wells are planned at this time but sidetracks are possible in the future.

The existing infrastructure on Cross Creek has a replacement cost of US$2.5 million while the field has proven reserves of 6.1BCF of gas. Currently before undertaking workovers on existing wells this field is producing in excess of 500 MCF of gas per day.  At optimum production the 9 wells on Cross Creek are projected to produce at a rate of over 15,000 MCF of gas per day and 400 BOPD.

The purpose of this Placing is to provide the Company with funds to complete the purchase of a 75% working interest in the producing Cross Creek Gas/Condensate Field by spending funds as detailed above to revamp this field and for general working capital.

The Key terms of the Option Agreement are for Texadon to undertake and complete remedial work on six existing producing wells as detailed above.

As part of its business strategy, the Company may make further acquisitions of similar assets within Texas to increase its revenue.

An oil and gas company engaging in the workover and production of oil and gas in the Texas Gulf Basin.

You can find out more about which cookies we are using in settings.

This website uses cookies so that we can provide you with the best user experience possible. Cookie information is stored in your browser and performs functions such as recognising you when you return to our website and helping our team to understand which sections of the website you find most interesting and useful.

Strictly Necessary Cookie should be enabled at all times so that we can save your preferences for cookie settings, including whether the banner will appear on your next visit.

If you disable this cookie, we will not be able to save your preferences. This means that every time you visit this website you will need to enable or disable cookies again.